Can You Eat Crow?

I have all kinds of crows around my house. They’re all over the place most of the year which always made me wonder if it would be okay to eat them if it ever came to that.

Crows are edible. You can eat them and they won’t make you sick. They taste similar to a goose, duck, or other dark meat bird. If they are prepared well, they will taste good, if not, they won’t taste that great. Some people claim they can’t be eaten because of their tendency to eat almost anything but that’s just not true.

If you’re in a survival situation, crow should be on the menu if you can catch them.

Is it Okay to Eat Crow?

Many people believe that crows should not be eaten because they eat carrion and trash. I’ll admit that it’s a little unappealing, and crow isn’t going to be high on my list of things to eat every day, but they’re okay to eat just like any other bird.

A lot of birds are pretty dirty, and crows aren’t really any different. It doesn’t matter if they eat trash or roadkill.

There was actually a time period around the 1930s that crow was a growing food craze across America. There are still restaurants in areas of the world that still serve crow occasionally as a special. 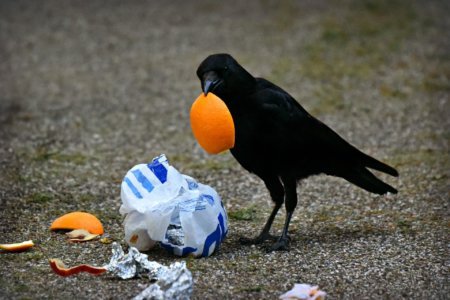 Another common misconception about crows is that they taste like carrion because they sometimes eat other dead animals. This is where the term “eating crow” comes from. Swallowing your pride can be difficult just like (it was thought) eating a crow would be difficult.

Crows are primarily dark meat, like most other birds. They’re described as having a gamey taste that’s actually pretty decent.

If they’re prepared correctly, then they come out tasting like a goose or a duck. If they’re not cooked well, the meat can seem grainy and tough.

How to Prepare Crow

When you’re getting the meat from a crow, it’s really only worth it to harvest the breasts. Crows don’t really have a lot of meat on them so it’s kind of a waste of time to do much more than that. The good thing is you can usually get a ton of crows in just one morning hunt.

Once you’ve collected as many crow breasts as you plan to cook, you can use any recipe that would work for other strong-flavored birds. Any dove, quail or grouse recipe is going to work well.

Can Crows be Hunted Legally?

There is some conflicting information out there about the legalities of hunting crow. Some say that they’re protected under the Migratory Bird Treaty Act of 1918 and some say that it’s fine to hunt them all year round.

The real answer is that it’s up to the individual state. Some states allow them to be hunted during certain seasons while others don’t allow it at all and others will let you hunt them all year.

You have to check in your particular area to see when (or if) it’s okay to hunt crows under normal conditions.

What Diseases Do Crows Carry?

According to medical news today, Most birds are capable of carrying diseases that can affect humans. While you should be aware of the possibility that a crow could be carrying a disease, this doesn’t mean that you can’t eat them.

Birds can pass the following diseases to humans:

Birds can carry the following parasites that can spread diseases to humans:

Do crows kill other birds? Crows eat the eggs and nestlings of other birds. They also sometimes eat adult birds of other species if they’re able to catch them, it’s just not very common at all.

How old do crows get? Crows can live to very old ages. Crows typically die around the age of 20 if they aren’t killed by some other means. The oldest wild crow was 30 years old and the oldest crow held in captivity was 59 years old!

Trying to figure out if you can eat crow is probably something a lot of us have done. Crows tend to be all over the place and they would be a convenient source of food if you could eat them…luckily you can eat crow.

Just make sure that you cook them properly or you may end up eating a crow that tastes like a boiled shoe. If you prepare them correctly they actually taste good!