Many people may not think of a broken window as a big deal, but they can be expensive and dangerous. If you have a reason to believe that your windows are vulnerable to any kind of threat, you might want to consider investing in window security film.

In general, window security film is a protective layer for your windows that makes them more resistant to breakage. It provides several benefits, including UV protection and privacy as well as extra security. It does not, however, render windows bulletproof.

If you are considering getting a window security film for your windows, there are many things that you should know. Read on to figure out whether this would be a worthy investment for you.

What is Window Security Film?

Window security film is a plastic film that you apply over the surface of your windowpane. It has a few different features:

Window security film works in a way that is comparable to automotive windshield glass. It stops the glass from shattering completely upon impact, even if something hits it hard and causes a crack or hole. It is also like laminated security glass, which consists of a PVB (polyvinyl butyral) layer between two layers of glass, melded together within an autoclave.

Other benefits of using window security film include:

How Effective is Security Film?

Window security film provides a substantial level of protection. It can help in the following ways:

It makes it harder to break the windows. In case an intruder is trying to get in, it can delay their entry. They will have to use much more force to get in, which will give you time to hide and call the authorities.

There are many situations in which you would benefit from using window security films, such as forced entry attempts, vandalism, accidents, and severe weather. When is Security Film Not Enough?

While window security film can be useful and has become stronger over the years, it does not render your windows completely shatterproof or bulletproof. It just makes them harder to break. If you are in the unfortunate situation where you are in a building that is vulnerable to gunfire, you will need something more durable for your windows.

In situations where you want powerful protection against glass breakage, here are some other options:

Window security film is more affordable than DefenseLite, BulletShield, or bulletproof glass. Typically, when it comes to security, the more expensive the material is, the better it will be at protecting you.

Do You Need Security Film?

Since it is an investment, you should only use window security film if you have had a comprehensive security assessment done. The assessment will tell you whether you need it, as well as where you should use it and the type of security film that would be optimal for you.

Many organizations conduct these assessments. They involve a thorough review of not only physical security but also technological systems and policies (if you are having a business assessed). The costs can vary based on the level of expertise of the assessor and the tasks that need to be done, typically ranging from $1,000 to $50,000.

These assessments can involve several components, such as:

The security assessment will likely include an analysis of the types of threats that your windows may face, such as:

How to Apply Security Film

Some people may think that this is as simple as laying contact paper down on a surface. However, there is a bit more to it. Therefore, you may want to consider hiring professionals for this job.

Generally, a professional will install the film on a retrofit basis. They will:

There are a few different methods of installation that may be appropriate, depending on the situation:

Things to Remember When Applying Film

There are a few common mistakes that people make when applying window security film. These are as follows:

Can Security Film Be Installed on Dual Pane and Low-E Glass?

It is highly recommended to install window film onto Low-E glass. With the right window films made explicitly for Low-E glass, you can increase the window’s performance without sacrificing light. It is also easier to install on Low-E glass, as you can use lighter and clearer films which are generally less expensive. There are many different types of window security films you can choose from. Of course, this also means that the prices can vary widely.

Window security films are made for windows of many different sizes. The bigger the sheet of film, the more it is going to cost.

Before you order your film, make sure that you measure your windows precisely. If you are in doubt, get a film that you know is larger than your window. Once you have it, you will be able to trim it down so that it fits your window.

In many cases, you will be able to get a long roll of film that you cut as needed for each one of your windows. If you have several windows in your building, this may be more economical for you.

Thicker security films are going to cost more because they are made from more material. However, the thicker the film, the more durable and effective it will be when it comes to protecting your windows. Most of the time, you will be able to see the thickness of the film (it should be specified in the product description) before you decide to purchase it.

There are many types of window security films available, such as:

Anti-graffiti window security film is designed to prevent any damage to your window that could be caused by vandalism, such as graffiti. If vandals spray paint, etch, or otherwise tag the window, the damage will be absorbed by the film rather than the glass itself. This film is designed to be removed and replaced as soon as the damage has happened.

Some windows are going to be easier to cover with film than others. You may elect to do this yourself, or you may find it easier to hire a professional for the job.

Here are some of the things you need to consider regarding the installation of the film:

Can It Cause Glass to Break?

Some consumers fear that window films can cause windows to break, and they are not entirely wrong, as glass can break under stress.

There are a few different stressors that can lead to breakage, such as:

Window security films will benefit your window as they will stave off mechanical and impact stresses. However, window films can cause thermal stress when they are not manufactured or installed correctly.

Since they work to absorb UV rays, some with up to 99% protection, they can cause excess stress on the window when there are flaws in manufacturing or not installed correctly. Unfortunately, this is a common occurrence, especially when an individual tries to install the window film on their own. As a result, plenty of manufacturers have created a 5-year warranty that replaces both windows and films if thermal breakage occurs.

How Long Does It Last?

High-quality window security films can last up to 25 years. Most manufacturers include warranties with their films so that, if your film is damaged, it can be replaced.

How to Care for Security Films

Proper care of your window security film can increase its lifespan and avoid scratches, cracks, and other misfortunes. Here are some useful tips for taking care of window films:

The following are a few window security films that people have found to be very useful, although what you will choose will depend on your specific priorities and needs. 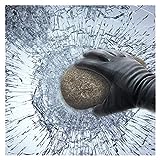 This is a very economical option for those who do not have a lot of money to spend. It will provide you with protection, as long as you are not anticipating significant disasters. It is perfect for people who just want to protect their windows from little chips or scratches. 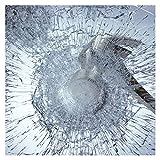 If you want a thicker and stronger option from BDF, this is the one for you, at 8 MIL. It is very good at absorbing impacts from break-in attempts and baseballs that might fly in from the backyard. It holds shattered glass together, which is essential for your safety. You can apply it to both tempered and non-tempered glass. It is clear and blocks out 99% of UV light. 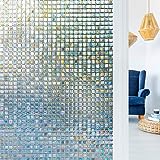 This is an excellent option for someone who wants a colored film that will spruce up their home. It has the appearance of stained, frosted glass, which is not only attractive but also gives you plenty of privacy as it makes it very hard for people to look in. It is incredibly affordable, giving you class without taking lots of cash.

This film blocks out 96% of UV rays, which protects your skin and also prevents unnecessary damage to your furniture. It adheres to your window using static cling, so you do not have to use any glue that could be sticky or toxic. 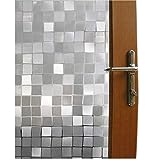 This is another fantastic option if you want an attractive window to look at. It gives you a white orchid pattern that can liven the decor within your home. It is also effortless to install, and you don’t need to hire professionals for this particular film. This film is primarily for those who want privacy, rather than the most durable security film available.

You do not need to use any adhesive for this wild film, either. It also functions to reduce the transfer of heat into your home and block UV rays.

Windows can brighten up a home. They allow light into the building, and they can make the atmosphere more cheerful. They can save you a lot of money on electricity since you get much of your light from outside. However, they also make a building more vulnerable since they provide easy ways for someone to break in or cause damage to your home.

Therefore, it is worth looking into window security films and what they can do for you. Even though it is not the very best option in terms of security alone, for many, it is the most affordable option.