EDC prybars have been pretty popular for a few years. You know what I’m talking about, the little metal prybars that are a couple of inches long and probably have a few other tools forced onto them. What are they good for?

A prybar is the most effective tool to apply leverage to open something or pry it apart. On top of that, EDC prybars usually have other tools built into them like bottle openers, screwdrivers and wrench flats. They also make good keychains.

Is an EDC prybar right for you? Keep reading to find out.

At first glance, it’s kind of hard to see why you would even want to EDC a tiny little prybar. They don’t look all that impressive, they aren’t big so you’re not going to get a lot of leverage out of them, and they don’t normally have many other useful tools on them.

So what’s the big deal? Well, in all honesty, the main thing that my little Gerber Shard does is keep me from breaking the tip off of my knife.

I can’t tell you how many times I’ve broken the tip off of knives doing things that I know I shouldn’t do with them. These little EDC prybars have stopped me from doing that so I consider them to be worth it right there. Purpose of an EDC Prybar

EDC prybars didn’t make a whole lot of sense to me when I first saw them, but the more I carry one, the happier I am that I have it. Knives are a cutting tool, these are prying tools.

One thing that’s overlooked so often with these prybars is that most of them are completely airline safe! This means that you can have a useful tool with you even if you fly a lot.

This is a no brainer… There’s no need to think outside of the box here. Whenever you have something that takes more force than you can exert with your fingers then these things are great!

From popping open keyfobs to replace the batteries, to pulling thumbtacks out of walls, to prying off paint can lids, to working nails out of walls, a little prybar definitely has its uses.

If you find that you run into situations where you need a little more prying power then one of the larger EDC prybars is probably a good idea for you.

I used to just use a sharp edge on one of my keys to cut the tape on all the stuff I have delivered, but it’s really not ideal. The prying ends of these prybars tend to be a little sharp so they cut through the tape on packages pretty easily.

Some prybars (like the Gerber Shard) work really well as wire strippers. The narrow “v” at the bottom of the prybar end makes short work of just about any wire you’ll run across.

If you ever need to scrape the rust or corrosion off of battery contacts or remove paint from a small surface then most of these prybars have you covered. There’s just a lot of things that you can do with a small tool like this.

Most mini prybars have some kind of bottle opener, but even if they don’t they’re still easy to use to pop the top off of a bottle. Just hold the bottle near the top and pry the lid off.

If you ride mountain bikes then you’ve had to change out a tire. I haven’t made the switch to tubeless tires yet, so I still have to occasionally replace a flat tube in one of my tires.

The prying edge of these EDC prybars makes a great tire lever to help get the tire off the rim and back on.

Any Other Functions Designed Into the Prybar

Most of the prybars out there have other functions designed into them to make them more appealing and more useful. The most common ones seem to be bottle openers, screwdrivers, wrenches, and carabiners.

What to Look for in an EDC Prybar

For the most part, the design of the prybar that you choose is really mostly personal preference, but there are a few things that I think make some prybars better than others.

Don’t Buy a Prybar with a Cutting Edge

I don’t like any tool that’s designed to sit in your pocket and has an exposed cutting edge. This goes double for things like prybars.

Most of these tools have areas that a pretty sharp but an area that’s specifically sharpened can make them really dangerous. Prying usually involves putting a lot of force behind the tool in order to move something that’s stuck. If your hand breaks free from the prybar then it can easily slide on to the sharp edge and cut you pretty badly.

This is especially true when you’re working with something as small as these EDC prybars.

Look for a Prying End with a Good Angle

Some of these prybars have very flat prying ends which makes them difficult to use as prybars. If you find one that’s angled, you can usually pry much better.

If you want a prybar that has some real power behind it, then choose on that is on the longer side. A 2.5″ – 3″ prybar can do a lot but a 5″ or 6″ prybar is MUCH more effective for prying. If you plan on getting one for a survival kit, then definitely get a larger one.

Like everything else, there are trade-offs based on what you choose. Smaller prybars are easier to carry around in your pocket, but longer ones are definitely more effective as prying tools.

There are a lot of EDC prybars on the market today. Some are good, and some just don’t make a lot of sense for one reason or another. The ones listed below represent the best that I’ve seen.

The Gerber Shard is my preferred EDC prybar. I really like the angle of the prybar which makes it much more effective than a lot of other prybars in this size range.

One of the best parts is it’s usually somewhere between $5 and $7 depending on when and where you buy it.

The only downside that I can see with it is all the pointy edges. I don’t have a problem with it, but some people have. 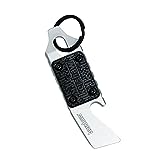 The Kershaw PT-1 is great for pocket carry because it doesn’t really have any sharp edges. If you want an EDC prybar that isn’t going to tear up your pockets or jab you in the leg, this is the one for you.

The prying edge also has a good angle to make it really effective as a prying tool. The glass injected handle also makes it a little nicer to use than others.

The Gerber Mullet has a great prying angle and doubles as a way to hang your keys from a belt loop or strap. It’s also has less pointy parts than the Gerber Shard. 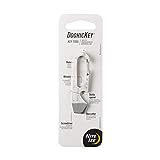 The Nite Ize Doohickey is the only carabiner-style prybar on the list. This lets you hang your keys from straps, loops, and backpacks pretty easily and makes getting your keys on and off of it really fast.

The lack of an angled prying edge and short length make it the worst at prying, but if you want a carabiner-style prybar, then this is probably the one for you. 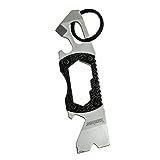 The Kershaw PT-2 needs a little work when you first get it. I recommend sharpening the point of the box opener/can opener just a little. Not enough to cut you, but enough to make it a little more useful.

The prying angle is pretty much non-existent as well so it struggles as a prybar compared to some of the others on the list here. That being said, it’s the only one that has a can opener.

Save your knife and keys and pick up an inexpensive EDC prybar for your keychain. You won’t use it every day, but I can almost promise you that there’s going to be a time where you’re going to be happy that you had it with you.