Emergency whistles can make the difference between life and death. From wilderness activities to long walks alone, many activities can have unexpected consequences that require assistance from others.

An emergency whistle is a whistle someone carries to call for help if they are in danger. It should be made of durable material, able to be firmly attached to you, be 115 dB or louder, and not sound similar to any bird or animal calls.

Why Use an Emergency Whistle?

The average human voice at its absolute loudest can create a noise about 120 decibels (dB.—the units used to measure the volume of sound). This is close to as loud as the siren on a cop car is, but this volume of noise takes a tremendous amount of effort and energy which will eventually render your voice horse and unusable. In an actual emergency or situation where you can’t move shouting may not be a plausible option.

Emergency whistles are a simple solution to this problem. As long as you can breathe you can sound a whistle. A good standard emergency whistle such as the Fox 40 will create a high-pitched tone at roughly 120 dB. with only a small amount of air. This allows you to save your voice and create a loud tone for much longer periods of time, which can be important if you encounter an emergency in the woods where it may be quite some time before someone is close enough to hear you.

Whistles are devices that destabilize a stream of air to create an oscillation between two streams of air, or one stream of air that becomes divided around an edge. Depending on the specifics of how the whistle is built the pitch and volumes available to the user can vary.

Some emergency whistles may come with what is called a cork ball inside. This is a ball held inside the whistles which generate a tone that oscillates more than a whistle without a cork ball. The ball is moved by air, rattling around inside, rapidly changing the tone depending on where the ball is. Some people think that cork ball whistles are easier to distinguish from other natural sounds such as bird calls and therefore will be easier for humans to distinguish as a call for help.

Other emergency whistles have multiple whistles that sound at different tones while blowing through one hole. These can create a tone that registers as a broader tone to the human ear and cuts through the background noise even if a different sound is ringing at one of the frequencies.

Buying a whistle can be tricky, most places that sell whistles will not let you test them for hygienic reasons. There are some more specialized outdoor stores that have a cleaning system for a series of test whistles which can be incredibly helpful. But there are some basics to keep in mind if you can only look at specifications listed on the product packaging. 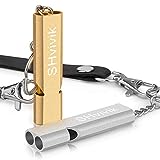 SHvivik Emergency Whistle –  Made of aluminum alloys and has a sturdy key ring to attach to just about anything. It can reach levels up to 120 dB. 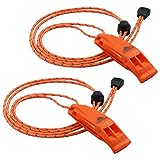 LuxoGear Emergency Whistle – Made of bright orange ABS plastic and has a lanyard that makes attaching easy.  It can produce sounds up to 120 dB.

Storm World Emergency Whistle – Made of bright orange plastic and comes with a keyring and detachable lanyard. It can reach sound levels up to 120 dB and can even be blown underwater.

When you’re choosing an emergency whistle, just remember that it’s possible for metal whistles to get cold enough to stick to your lips in cold environments. Other than that, as long as they’re durable and loud enough, you really can’t go wrong.

How To Blow An Emergency Whistle

Whistles can create a noise similar to other natural noises such as:

To distinguish from these in an emergency, you should develop a distinctive pattern that is constant and one that can be sustained for long periods of time.

Most people will use the Morse code distress signal for SOS. It is recognizable by most people as the only Morse code they will ever learn, and SOS acts as a universal call of distress, standing for Save Our Souls. You can repeat this over and over as it may be the best chance of someone finding you in your time of distress.

You should listen to the sounds around you. The SOS pattern is not a full-proof plan. You need to make sure that your whistle blows do not sound similar to any other sounds you can hear while blowing your whistle. If blown in constant quick or sporadic succession whistles can easily be mistaken for birdcalls by some people.

An emergency whistle can be an invaluable part of any survival or emergency kit, but blowing a whistle in an emergency may not always be the most useful course of action. A whistle can call for help, but if there is no one around to hear it the effort used making the noise will be in vain.

Evaluate where you are. If you are hiking on a trail an emergency whistle is likely to attract the attention of other hikers who can find you and help or go find help if needed. But if you are hiking in the remote wilderness it is very possible that no person will hear you. A whistle is not a substitute for a beacon or a cell-phone which in some cases will trump your whistle’s ability to call for help.

Using an emergency whistle is best when you are hiking with other people. If you all have emergency whistles you can relax a little more about losing members of your party because you all know you can contact the others if a detrimental mistake occurs and one of you finds yourself in an emergency.

An emergency whistle could no doubt save your life when used in the right way under the right circumstances, but it is not a catch-all for the emergencies you may face. Being prepared and aware enough to spot and handle your emergencies on your own will likely be your best course of action in any distressing situation. The best way to get out of an emergency is to avoid the circumstances that can lead to an emergency altogether. So, cover all your bases, one of which is having your emergency whistle on you for the moment disaster strikes.