Can You Wear Contacts Following an SHTF Event?

I recently had a conversation with a guy that wears contacts. He has been prepping for several years and has close to a year of food and a couple hundred gallons of water stored, but he only had one pair of glasses. Those glasses weren’t even a current prescription. They were over three years old!

Before I had corrective surgery on my eyes, I was completely useless without glasses or contacts. There are very few things more important than your ability to see in a post-collapse environment. If you wear contacts, make sure you have a couple pairs of glasses available as well!

Following a collapse or even an extended disaster, it is not going to be a good idea to wear contact lenses. The FDA warns that “wearing contact lenses puts you at risk of several serious conditions including eye infections and corneal ulcers.”

This isn’t something that people think about very often. Of course, if you’re a prepper that wears contacts then it should be something you take into account. Even those that think about it don’t always have a current pair of glasses available, let alone multiple pairs in case one pair gets scratched, breaks or gets lost.

Most people are not going to have access to the types of antibiotics that are needed to quickly counter an eye infection before it gets out of control. Many types of eye infections will clear up on their own, but many can also lead to permanent vision impairment. Wearing contacts in that type of environment just isn’t worth it.

Fish antibiotics are good way to stockpile antibiotics to fight these infections in times when there aren’t any doctors! 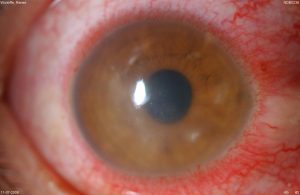 Keratitis is caused by bacteria, viruses, fungi or parasites and causes inflammation of the cornea. Treatment for bacterial keratitis is normally done with antibacterial eye drops.

For viruses and fungal infections, an eye drop and an oral medication are used.

If keratitis cannot be treated or is allowed to go untreated, it leads to scarring of the cornea and impaired vision. Extreme cases will cause loss of vision. 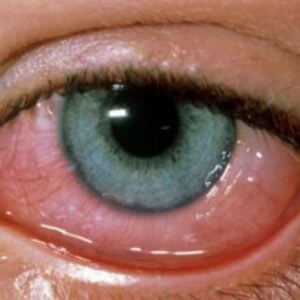 Conjunctivitis is caused by bacteria or viruses and affects the lining of the eyelid and the white portion of your eye. It can be extremely contagious and is easily spread from person to person. Normally conjunctivitis will clear up on its own. Antibiotics can be used to treat the infection and are normally prescribed by today’s doctors.

If it doesn’t clear up on its own and is left untreated, it can cause scarring on the cornea and lead to permanent vision impairment. Vision impairment is very rare but the simple possibility of having your vision

The bottom line is you shouldn’t wear contacts following a collapse if at all possible. Have several pairs of glasses available. If you can afford to have laser eye surgery, I would highly recommend it!

Be sure to check out our article on using animal antibiotics in an SHTF. Medications that are readily available for fish and other animals can be stored and used to cure infractions such as these.