What’s the most important thing you need to survive in an SHTF? In my opinion, it’s having a survival mindset.

In a real SHTF scenario, I think we’re all going to be surprised by the people who have the will to live. Some of those people will even surprise themselves.

A survival mindset is a conscious decision to continue going on no matter what happens, no matter how difficult life gets. You pledge to continue to live as best as you can. It is the mindset that survivors of war and disasters adopt in order to continue to go on.

It won’t just be preppers that have a survival mindset during an SHTF. Even some of those people that come onto prepping forums and blogs asking about why you would want to live in a world that has fallen apart will be surprised that they can’t just give up. They’ll fight to stay alive simply because that’s how they’re wired.

In fact, one of the groups with the highest survival rates during disasters is children 6 and under! The will to live can be even more important than knowledge and preparedness. As a prepper, I find that hard to say, but it’s true.

What Does It Mean to Have the Correct Mindset?

A survival mindset strong enough to deal with an SHTF event will need to be exceptionally strong. You will have to be able to witness the end of the world as it has always been.

You’ll have to be able to experience terrible acts of violence and the deaths of those you know and love. You’ll need to be strong enough to go through the most disturbing things you’ve ever experienced and come through on the other side with a desire to press on.

It’s not an easy thing, but it’s absolutely possible for most people to develop a survival mindset. Nations have come and gone, wars have raged on across entire continents and technology has been lost to time. Nothing is new. It’s all been survived before and will be survived again.

Know that, believe that and internalize that. Once you do that, you’re well on your way to developing a survival mindset.

How Can You Develop this Mindset?

Our society has taught us that pain should be avoided at all costs. It has also taught us that anything difficult is bad and if you have to struggle to achieve something then you have already failed.

If you intend to better yourself and develop a survival mindset for an SHTF, you need to push these thoughts out of your way.

For some of us, this may be amazingly difficult. If you’ve been raised to avoid struggle, flee from conflict and call for help whenever things aren’t going your way, then you may be facing an uphill battle, but it’s still possible!

Mental toughness and resilience can be developed in many ways. One of my favorites is through the use of visualization.

Visualization as a Path to Toughness

Many of us already do visualization exercises to some degree or another. Call it daydreaming, call it a mental rehearsal, call it whatever you want. Visualization doesn’t just help us come up with bug out plans, it also helps us mentally prepare for traumatic events like SHTF.

Studies have shown that visualization is nearly as effective as real-world practice for preparing us for difficult situations. Studies have also shown that you’re much more likely to be able to complete tasks that you have worked through in your mind beforehand.

Be as in-depth and thorough when you’re practicing visualization. The more realistic you can be the better these exercises are to help develop a survival mindset. 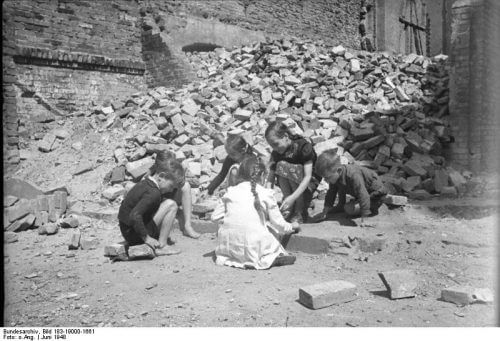 Learn to Control Your Emotions

Giving in to your emotions is the fastest way to cripple yourself. Becoming emotional not only causes you to think less clearly, but it also hinders those around you. Fear is the one emotion that will throw off your survival mindset the most.

Don’t get me wrong, you’re not going to be able to turn yourself into a robot. You’re going to feel fear, but you need to learn to control how you react to it.

Fear is the body’s natural reaction to situations that may end up causing you to become injured or killed. It’s your brain’s defense mechanism that tells you to stop what you’re doing because it could result in you injuring yourself. It’s one of the reasons that humans have made it this far, but it can also lead to bad decision making, hesitation or complete inaction.

In an SHTF you need to control your fear so you can do the things that you need to do in order to keep living, but how do you control fear?

I disarm bombs for a living. People automatically assume I have some magical way to not feel fear. This couldn’t be farther from the truth. I’m afraid every time I have to do my job. I just don’t allow it to slow me down. That’s the key to dealing with fear. You know it’s there, you understand that it’s normal and you learn to not let it influence your actions or thought process.

Knowledge is one of the best ways to counter fear. The unknown is a scary place. By learning things like how to build or find shelter, how to find food, how to collect water, etc. you can make a true SHTF all that much less scary.

A common way to combat fear is through the use of deep breathing. Fear does a lot of things to the body. It raises your heart rate and releases all kinds of chemicals into your body. Deep breathing can help to lower your heart rate and it also gives you something to concentrate on besides the fact that you’re afraid. It’s a great skill to compliment your survival mindset.

Goal setting in a survival situation should focus on short, intermediate and long-term goals.

Short-term goals should be very short-term. These will most likely be the thing you’re working on right at that time. Focusing on the now will keep your mind from wandering.

Intermediate goals should focus on an overall goal for the next few hours or maybe the end of the day.

Long-term goals are those larger projects that you need to accomplish in the next few days to a week.

Setting shorter goals keeps you thinking about what you need to accomplish and also helps fend off the monotony that can come during an SHTF. A survival mindset is easier to maintain when you have something to live for tomorrow, next week or next month.

There are a lot of ways that you can develop a survival mindset for an SHTF. In the end, it’s really up to everyone to learn what works best for them.

Try to stay calm, logical, and reason through your problems. Don’t dwell on the negative and try to not think about things that you cannot control, and never drown your emotions with alcohol or drug use in an SHTF.

Above all NEVER GIVE UP!