The Spyderco Salt series of knives have been around for a long time, but not many people have heard of them. If you work around the water, live in a humid area, love fishing or just want a knife that isn’t going to rust on you, then you should be interested in what the Salt line of knives can offer you.

Spyderco’s Salt Series of knives are designed with use in and around water. The main difference in the design of their Salt knives is the use of corrosion-resistant steels. By using H1 or LC200N in the blades, they are able to resist corrosion for long periods of time in environments where other knives would rust and fail.

Let’s look at what the Salt line can offer you and some of the most useful knives from the series.

What is the Spyderco Salt Series

Anyone who spends a lot of time fishing, boating, working around the water, or just carrying a knife while sweating a lot will know that some knives just don’t hold up as well as others when it comes to resisting corrosion. This is where the Spyderco Salt series comes in.

The Salt series is specifically designed for the people who work, live, and play around the water. The steels they use were designed specifically to resist rusting and even the metal accessories on the knife are corrosion resistant.

When you look at the Salt series the first thing that stands out is that a lot of the blade designs are serrated with many of the designs being traditional watercraft or boating shapes. This is because a serrated blade does a very good job of cutting fibrous material like ropes and cuts through straps and seatbelts much faster than a straight edge blade. This is especially important for people doing maritime rescue work.

All of the normal Spyderco blade shapes are available in the Salt line but there are a large number of sheepsfoot and hawkbill blades in the series. This suits the people most likely to carry one of the Salt knives, people who spend time on boats for either work or pleasure.

The sheepsfoot design is beneficial for use on boats because the tip does not have a sharp point making it less likely to stick in a foot if dropped and has been adopted by many EMTs and other people that may have to make cuts close to flesh. A hawkbill blade is excellent at cutting through ropes, netting, and straps that fishermen and sailors run into.

What’s Different with the Salt Line of Knives?

The first thing that you tend to notice is the bright yellow handle that most of the Salt series use. The bright yellow color makes the knife more visible if you happen to drop it in murky water, but that’s not the main difference that makes the Salt line stand out. That comes with the materials used to make them.

Every knife is made with either an H1 or LC200N steel blade and does its best to cut down on the amount of metal used in the knife. The metal parts that can’t be removed are made with stainless steel and other corrosion-resistant metals.

H1 steel is made with 1% nitrogen instead of carbon and is naturally hard without heat-treating by using a precipitation hardening process instead. This makes the blade almost impervious to rusting and pitting and gives it a hardness that is similar to premium carbon steels. If you really want to go deep into how H1 steel is made (all the way down to a molecular level) then you can read about it here.

LC200N steel is basically a huge leap forward in blade technology. It uses nitrogen in the production of the steel instead of carbon so it basically can’t rust and it’s harder than H1 steel meaning that it holds an edge much better. If I had to choose between a knife made with H1 or LC200N, I would go with the LC200N. In fact, I went with the Spyderco Native 5 Salt as one of the knives in my EDC rotation.

There really aren’t any of the Salt series knives that I wouldn’t recommend, but these are the ones that I like the most. 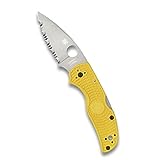 The Native 5 Salt is a play on one of Spyderco’s most popular knives. (You can read my full review here.) It uses LC200N steel which gives it good edge retention and is available in either a plain or serrated blade. 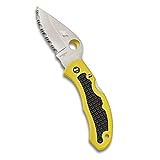 The Snap-it Salt is a corrosion-resistant, handy knife with a built-in snap link on top that lets you attach it to a carabiner, hook, belt loop, or just about anything else. The design is really interesting because when the knife is opened up, the snap link on the top disappears into the blade and doesn’t interfere with cutting or add to the overall length on the knife.

All of the knife’s metal is corrosion-resistant, including the clip, and the blade has a larger hole to give extra leverage for one-handed opening. You can find the blade finished in either a plain or serrated edge.

This is a popular knife with hikers, climbers, and other people that need to make sure that their knife isn’t going to drop out of their pockets or get snagged in some underbrush. 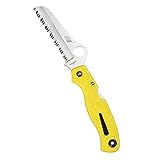 The Atlantic Salt is a copy of Spyderco’s Rescue line of life. The Rescue line is intended for EMTs, firefighters, paramedics, police, and anyone else that may have to get in and cut material like seatbelts and clothing close to the skin of a victim. The Atlantic Salt ramps that up a little and adds full corrosion resistance making it popular among rescue divers and sailors.

You can get the handle in either black or yellow and the blade only comes in a serrated finish. 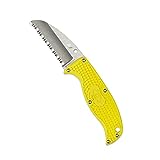 It has fiberglass-reinforced scales for durability and uses their bi-directional texturing to keep it from slipping in the hand, even when it’s wet. The serrated edge of the blade is specifically designed to cut rope and netting easily.

One of the best features of this knife is the injection-molded polymer sheath with all corrosion resistant fittings. Some of the best fixed blades out there come with crappy sheaths that don’t do the knife any justice. This one is different.

If you’re interested in a fixed blade that’s not going to rust, even under extremely harsh conditions, this knife should be on your shortlist of prospects. 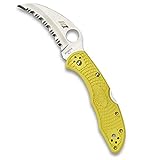 Spyderco’s Talisman Salt 2 is an aggressive knife designed to cut through tough fibrous materials like water-soaked ropes and netting. The hawkbill design is made to focus the cutting power of the user in an optimal way.

It comes with black or yellow handles and can be found in both serrated or plain blades.

If I was looking for an aggressive knife for boating or using around water, I would go for the Talisman Salt 2 with a yellow handle and serrated blade.

The Salt series is Spyderco’s answer for people looking for hard use knives that are likely to get wet and could rust. By using H1 and LC200N steels they take away the chance that you’re going to reach for your knife and find it pitted and rusty.

They have an entire line of knives in this series that can fit just about anyone’s needs. It really doesn’t matter if you work around water or not, they’re just great all-around knives.