Edible grasses are kind of a tricky subject in the survival community. There are a lot of people that say you can eat grass and a lot that say you can’t, what is the real answer?

Humans can eat many different grasses but they usually don’t get the same amount of nutrients as animals do. The grasses on this list are all edible by humans:

While you can certainly eat grass, it isn’t always quite so cut and dry.

What Grasses Can You Eat

You can eat a wide range of different types of grasses, but many of them don’t provide a significant amount of nutrients to humans. They can help you feel full, but you just don’t have the ability to break down a lot of them.

Animals that eat grass have huge guts and even multiple stomachs so they can effectively digest grasses and get the most nutrients out of them. Humans don’t have the ability to break down the cellulose found in most grasses, so they can’t get the same nutrients from them.

Of course, this is a general statement and doesn’t always apply. Some of the most common foods around the world are grasses. Corn, wheat, and rice are all grasses.

One of the main ways that we get around our lack of ability to eat grasses is by drying them and processing them into a form that’s easier for us to digest. So while you may want to run out and start eating your lawn in a survival situation, there just aren’t a lot of calories to be had from it.

The seed of grasses is where most of the value is if you’re looking to eat grass in a survival situation. Any grass seeds can be harvested and ground into a flour. They can also be soaked until they’re soft or boiled into a porridge before they’re eaten.

Can You Boil and Eat Grass?

The leaves and stems of grass aren’t digestible by people and boiling them doesn’t break down the cellulose enough to change that. You can still eat the grass, but it’ll eventually cause digestive problems.

Seeds from the different types of grasses CAN be boiled to make them softer and turn them into an edible paste or porridge-like meal. This usually will be digestible and is a good way to eat grasses in the wild or in a survival situation.

Wheat – The wheatgrass fad is still going pretty strong in some areas. People have been juicing the fresh sprouts of the common wheat plant for years and claim to have all kinds of great results from reduced blood sugar, to a decrease in inflammation. WebMD says that there’s no scientific proof to back any of that up.

You can also eat fresh sprouts without juicing them, but the nutritional value is questionable.

The real value comes from the fully grown plant that provides a lot of the average person’s caloric intake.

Corn – Corn is another grass that’s edible but doesn’t provide much in the way of nutrients for people until it’s full-grown and the grain is harvested.

Corn can be eaten raw, cooked or ground into cornmeal.

Bamboo – Bamboo shoots are eaten in a lot of cultures. When the plant is young, it’s possible to eat the soft white inner core of the stalks after you remove any of the harder exteriors layers and boil it to remove the toxins.

Ricegrass – Ricegrass is high in fiber and protein. It was a staple grain in the diet of many Native American tribes until they were introduced to corn.

The grain can be separated by shaking and then dried and ground into flour to make bread, soups, and porridge. You can also boil it until it’s thick and form it into dumplings.

Lemongrass – Lemongrass is primarily used as a flavoring but can be eaten whole. Raw lemongrass is eaten by removing the outer stalk then consuming the inner core.

Barley – Barley grass is harvested and used in a similar way as wheatgrass. It’s juiced, made into powders and pills for its high amounts of vitamins and perceived medicinal uses.

It’s mostly eaten after it’s matured and harvested for the grain it produces.

Oats – Oatgrass is raised as feed for animals but is also used like wheatgrass in juices and powders.

It’s best eaten once it’s matured and you can harvest the grain it produces. In this form, it’s used in cereals, porridges, and baking.

Sugar Cane – Sugar cane is another massively popular grass used throughout the world.

Sugar cane can be eaten by chewing the inner core of the stalk to release a sweet flavor. You can also smash the inner core into a liquid to try to extract the flavor. Swallowing the fibrous stalk itself isn’t recommended. 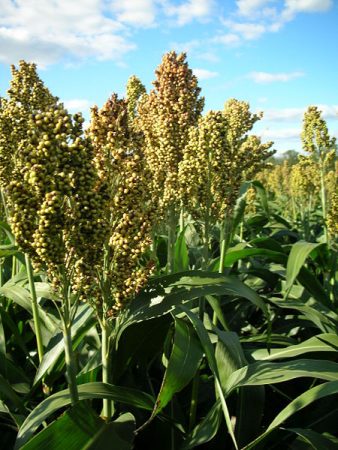 Sorghum – Sorghum is actually the 5th most popular grain in the world and is a grass. Again, the main source of nutrients for us is from the grain that’s produced when the plant is fully grown.

Sorghum is gluten-free so it’s also safe for those with celiac disease to eat and it’s currently not genetically modified.

Crabgrass – Many people consider crabgrass to be a weed, but it’s actually capable of being eaten. In some areas of Africa, crabgrass seed is harvested as a staple grain in meals. It can be used as flour, couscous or as a grain.

Crabgrass is also one of the fastest-growing grains with its seed being harvestable in only 6 – 8 weeks.

Goosegrass – Goosegrass has small hairs over it which can make it stick to your clothes and also makes it appear less tan edible, but you can eat it.

If you gather the leaves and stems, you can boil them and eat them like greens as long as its fruit hasn’t appeared. You can dry and roast the fruit then grind it to use like coffee.

Foxtail Grass – Foxtail grass is sometimes grown as a food crop in some parts of the world. It produces grain that is about the size of rice.

The grain itself is bitter but can be eaten raw. Cooking it will reduce the bitterness and make it easier to eat.

Bluegrass – Bluegrass is edible, but it doesn’t provide much in the way of nutrients for people. It’s best left to the animals.

Rye – Rye is mostly used for the berries that it produces. You can dry them and grind them to make flour or boil them and eat the berries once they’ve become a porridge-like consistency.

Orchardgrass – Orchardgrass is like most other types of grass you’d find in a pasture, it’s best left for the animals even though it’s edible.

Wild Oats – Wild oats can be harvested for their grain. The grain can be ground into flour and used that way or you can boil them to make a sticky paste that’s high in protein.

Millet – Millet is a small seed grass that’s grown around the world as a staple grain. The seeds can be harvested and ground into flour and then made into bread or other goods.

Most grasses are actually edible but that doesn’t mean that you should just run out and start eating grass. The best way to get edible food from grasses is to wait until they seed and then harvest that seed and use it as you would any other grain.