Most people decide to go with a folding knife of some kind for EDC, but what about all the great fixed blades that are out there?

If you interested in adding a fixed blade to your EDC, keep reading to get some ideas on how to go about it!

Carrying a Fixed Blade as Part of Your EDC

The main disadvantage of carrying a fixed blade is that the blade doesn’t fold, so they tend to be longer than a folding knife. This makes them more difficult to carry comfortably and to conceal, but those are the only real disadvantages. There are also some great advantages that fixed blades have over most folding knives. Folding blades are usually weakest at the hinge where they fold. Fixed blades don’t fold, so they don’t have that disadvantage. If you value the strength of your knife over ease of carrying, then a fixed blade makes perfect sense for you.

Most people that carry fixed blades use them as part of their daily jobs or live in more rural areas where seeing someone carrying a large knife doesn’t draw any extra attention. If you’re carrying a fixed blade in an urban area, then people that see it may react differently.

How to EDC a Fixed Blade Knife 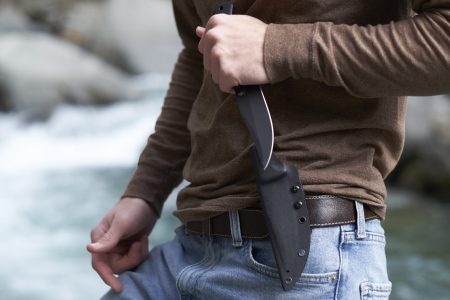 Outside the waistband carry is probably the most popular way to carry a fixed blade knife. This just involves attaching the knife to your belt, either tip down or tip up. It just works. There really isn’t a lot to say about it.

Inside the waistband carry is similar to the way that you’d conceal carry a pistol. The sheath and blade are inside of your pants so they can’t be seen and the handle protrudes up so you can grab it and get to the knife when you need it.

This is the least comfortable way to carry a fixed blade for me. The only time that I don’t mind it is if I’m carrying something small like a Ka-Bar TDI.

A dropleg sheath can make carrying a fixed blade much more comfortable for a lot of people. By moving the sheath below the beltline, you don’t run into issues where the handle can jab you in the side.

Most dropleg sheathes have some way to attach the bottom of the sheath to your thigh to prevent it from moving around while you’re walking or crouching. I suggest giving it a try with the sheath tied down and with it loose. They both feel very different and you may find that you like one over the other.

A neck knife is simply a fixed blade knife with a sheath that hangs from a cord around your neck. I’ve never been a fan of neck knives, but there are a ton of people out there that really love them.

The advantages of this style of carry are that you can carry this way in shorts and a t-shirt without any problems. This really lends itself to smaller knives that aren’t going to be too annoying as they swing around on your neck.

I see this being most effective as a work/recreation style of carry, and probably not a true EDC carry method. Scout carry is probably the way that I’m most comfortable carrying a fixed blade as part of my EDC. This is when you attach the sheath inline with your belt.

The downside of scout carry is that if you carry a larger knife, then you end up with the handle (or the blade) sticking out away from your body. You can get around this by carrying in the small of your back, but I don’t recommend carrying anything hard directly over your spine.

Cant carry is pretty much like scout carry, except that the blade is angled up slightly. This sometimes lets you carry a slightly longer blade without it sticking out like it can with scout carry and it can make getting a grip on the handle a little easier.

You can pocket carry a fixed blade by attaching the tip of the sheath to your belt or belt loop with a cord and then putting the knife and sheath into your pocket. This way, when you grab the handle of the knife and draw it, the sheath will pull away when it reaches the end of the cord.

Pocket carrying a fixed blade can be comfortable for some people, but I don’t really like it. I prefer to have the knife firmly attached to something rather than loosely sitting in my pocket.

What Side Do You Carry a Knife On?

There are a lot of options for carrying a knife beyond just the specific type of sheath or carry style. One of the most important is deciding exactly where you carry the knife.

This changes a little if you’re carrying a pistol as part of your EDC. In this case, most people carry their pistol on their strong side so a cross draw option may make more sense for you.

Some people will carry their pistol and their fixed blade on the same side. I don’t like this because I wouldn’t want to be reaching for my knife and have someone mistakenly think that I’m going for a gun. It’s not likely to happen, but it’s not a scenario that I want to find myself in.

For me, I like to carry a fixed blade on my left side. I appendix carry my EDC pistol so I could also carry it on my strong side if I wanted to.

It’s always hard to come up with a list of things that are the very best in any category, and fixed blade knives are no different. These knives are chosen based on quality construction, ease of carry and overall usefulness on a day to day basis. 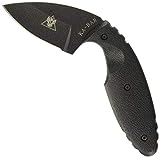 The Ka-Bar TDI is probably the best known defensive fixed blade knife out there. It’s comfortable to carry inside and outside the waistband and the handle angle makes it easy to grip and carry.

It’s really more of a defensive knife than anything else. You could carry it to do other cutting tasks but there are better knives out there for those tasks.

If you’re looking for a fixed blade to carry for defense then you can’t go wrong with the TDI. 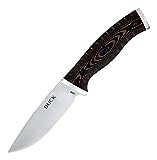 The Buck Knives 853 Small Selkirk is probably the best looking knife on the list. It’s marketed as a survival knife due to its full tang design and the metal base of the handle that can be used as a hammer in a pinch, but the blade size and blade design is perfect for EDC use if you’re routinely doing tough jobs.

The blade itself is 4 inches and the overall length is 8 1/4 inches. It has a micarta handle with small serrations to give it a decent amount of grip without being too rough and comes with an injection molded sheath that can carry the knife vertically or horizontally.

The popularity of the Small Selkirk is nice because there are a few custom leather sheath makers that make great scout carry leather sheaths for these! 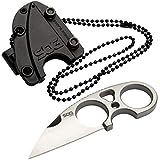 The SOG Snarl is an interesting little sheepsfoot style blade. It’s different than any other knife on the list because of its all-metal design and handle that has finger rings.

The blade itself is 2.3 inches long and the overall length is 4.3 inches. The handle can be so small because the finger holes let you get a secure grip without the chance of your hand sliding up on the blade.

As a neck knife, the Snarl is a solid purchase. It comes with a kydex sheath with a clip on the back to clip it to a belt or backpack as well.

The Gerber Strongarm is the most “tactical” of the knives on the list. It’s strongly marketed toward the military and police, but it would also be perfect as an EDC fixed blade out on the homestead or in a more rural area.

It’s a full tang knife with a small striker on the base of the rubber-coated handle. The blade length is 4.8 inches and it’s 9.8 inches overall making it on the larger side of knives that I’d carry regularly.

It comes with a plastic sheath that has a slightly confusing attachment system that lets you connect it to Molle webbing, wear it scout style or attach it to your belt in a traditional vertical carry position.

The Gerber Gator Premium is made to be a good looking knife that uses premium materials but is still perfectly at home doing hard work out in the field. I like the handle of the Buck Small Selkirk more but this is probably my favorite fixed blade on the list.

The knife has a lot of similarities with the Buck Small Selkirk. It’s 3/4 inch longer at 9 inches and the blade is the same length at 4 inches. It also has a full tang and a handle with a lot of grip, but the Gator Premium is glass injected nylon coated with rubber.

The sheath is the downside of this knife. Gerber claims it’s made of premium leather but you’d be better off with a different sheath if you’re really going to carry this every day. 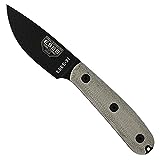 The Esee 3HM is a slightly modified version of the ridiculously popular Esee 3. The HM in the name stands for handle modified. The original Esse 3 had a more tactical feel to it while the Esee 3HM has a more bushcrafting style to it. A lot of people seem to like this handle better than the original.

The cutting edge of the blade is 3 1/2 inches long and the overall length is just over 8 inches. The handle is a textured micarta that cleans up easily after hard use.

There are three sheath options with the Esee 3HM. You can get it with black leather, brown leather or in Kydex. The downside is they’re all designed for a traditional vertical belt carry but you can get creative with 550 cord to modify how you can carry it.

In the end, it’s really up to you if carrying a fixed blade as part of your EDC is for you. I like it when I may need a knife that’s stronger and may need to take a little bit of a beating. When I’m camping or hiking I carry a fixed blade.

The truth is a fixed blade just doesn’t make sense for me every day so I only carry one when I feel like it may be necessary. Other than that, I rely on a folder of some kind tucked into my pocket.

You may be different though, and I encourage you to at least give it a try. You may like it!