Can You Eat Dead Crab?

If you happen to live by the ocean, crab is a very common and easy thing to catch and cook. They’re also a great source of food if you happen to be stuck in a survival situation near the ocean.

It’s always best to try to keep crabs alive until you’re ready to cook them. If you put crabs on ice they should be good for 24-48 hours. If you can’t get them on ice right away they’re only good for a couple of hours after they die. If you don’t know when they died, throw them away.

Eating dead crabs can make you really sick but it can be okay if you know what you’re doing.

Is it Okay to Eat Dead Crabs

There are two different reasons why you don’t want to eat dead crab. The first is that it could cause food poisoning and the second is that they taste much better if they’re alive or just recently died than if they have been dead for a while. Let’s look at the worst-case scenario first.

When a crab dies, it begins to decompose like any other animal. This decomposition comes with a massive increase in bacteria and waste products that the bacteria produce.

The bacteria themselves and the waste products they produce can make you sick, normally this is referred to as shellfish poisoning.

Learn how to make your own long term food storage in this article!

Within 30 minutes, the enzymes and bacteria in the crab’s mid-gut can start spreading throughout the animal and completely contaminate it. You can slow this down by keeping the crab out of the sun and in a cool place, preferably at a temperature below 45 degrees.

The second reason that eating dead crab isn’t ideal is that it can ruin the flavor and texture of the meat. Meat from a dead crab will get mushy and lose the delicate flavor that fresh crabs have.

The digestive enzymes that escape from the crab’s gut begin to break down the meat of the crab. It’s best to cook them within 10 or 15 minutes of dying in order to preserve the meat for as long as possible.

If they’re kept cool, crabs can be cooked 24-48 hours after they die but the flavor and texture are going to suffer. The good thing is they shouldn’t cause you to get sick. 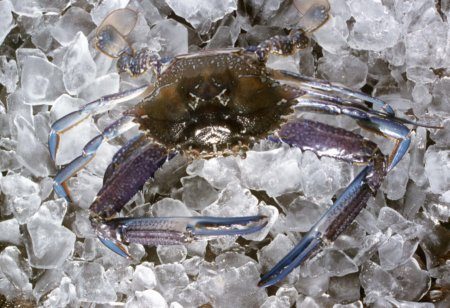 Shellfish poisoning happens when you eat crabs, shrimp, clams, oysters and other shellfish that are contaminated with bacteria or viruses. Many times the contaminated shellfish will have a tainted or putrid odor to give you a clue that it’s bad, but not always.

If you or someone else has shellfish poisoning, then you should stay hydrated and not induce vomiting. Keep drinking clear liquids if possible. For really bad vomiting and diarrhea, you probably want to get some kind of IV fluids going.

Don’t take anything for the cramps and diarrhea other than some Pepto. Other types of medicines that reduce cramps will keep the infected material in the body for a longer period of time and lengthen the time of the sickness!

You should get medical attention if you’re not able to keep fluids down, have bloody stool, or a fever.

What Parts of the Crab are Poisonous?

Crabs themselves are actually not poisonous. I don’t know of any crab that is poisonous in and of itself.

If there is something that can make you sick it is something that happens outside of the crab’s control. Pollution and eating crabs that have been dead for too long are the only ways that I know of for a crab to be poisonous.

On softshell crabs, the lungs/gills, mouthparts and abdomen are removed from the crab because they don’t taste good and they’re hard. Other than that the rest of the crab is fine to eat. You could even eat the other parts if you wanted to but it’s not advisable.

On hard-shelled crabs, you remove the shell because it’s hard and would mess up your mouth and probably your stomach if you ate it. Not because any of it is poisonous.

Eating any undercooked food can make you sick. Properly prepared saltwater crab is sometimes eaten partially cooked or even raw, but I personally stay away from it.

Freshwater crab has been known to cause serious outbreaks of disease. I strongly suggest you never eat it other than when it’s fully cooked.

How to Tell if a Crab is Dead or Alive

Most information that you can find about crabs is handed down between fishermen or older family members to younger ones. This is especially true if you try to figure out how to tell if a crab is still alive.

There are all kinds of techniques that people use to tell if a crab is still alive. Pour water on it, flip it over, pull a leg off, etc. I try to stick to simple ways to see if they’re still kicking.

Crabs can seem like they’re dead when they’re really cold, or be close to dying and not move at all.

Sometimes splashing a little water on them will get them moving a little as well. If you’re not sure if the crab is alive, then I’d just consider it dead and move on.

Eating Crabs in a Survival Situation

Survival is a lot of what we discuss here on Ready Lifestyle. In this case, it makes sense to think about how crabs can fit into a survival situation.

If you’re lucky enough to have access to the ocean during a survival situation, then you’re going to have plenty of food. The bad side is most off the food has the potential to make you really sick if you don’t prepare it correctly or eat it after it’s spoiled.

Crabs are no different than most of the other things in the ocean. Eat them when they’re fresh and you should be fine. Eat them after they’ve died and you could be in for a long couple days or even death… Keep this in mind when if you’re ever in that situation.

Feel free to use dead fish, crabs, etc. as bait for other things but don’t eat them yourself. No matter how hungry you are it’s going to be better to wait until you can capture something alive than eating something that’s dead and washed up on the shore.

What happens if you eat crab gills? Crab gills or lungs are not poisonous. You can eat the entire crab if you want and not suffer any kind of ill effect, not that you’d really want to. It’s simply an old wives’ tale that crab gills/lungs are poisonous.