Most of us worry about the best knife or the best concealed carry gun or some other type of “cool guy” gear, but we often overlook things like what type of tourniquet you should have on you.

The best EDC tourniquet is the SWAT-T Tourniquet. It weighs 4 ounces and comes in a sealed plastic package 4″ x 2.5″ x .5″. It can be used on both people and animals and can also be used as an elastic bandage or pressure dressing.

Let’s look at some of the things that make a tourniquet a necessary part of your EDC and what tourniquets are better for EDC than others.

A lot of people don’t carry any kind of medical gear with them on a regular basis. They’ll carry a knife, lighter, pistol, extra magazine, and all kinds of other things but they don’t even have first aid kits in their cars or trucks!

Medical supplies are way more likely to be used to save a life than anything else you can carry, and just carrying a tourniquet will allow you to stop bleeding on a good majority of wounds that would result in life-threatening blood loss.

If you decide to only carry one item with you, it should be a tourniquet!

Tourniquets work amazingly well! I personally know quite a few people that wouldn’t be alive if someone wasn’t there with a tourniquet when they got injured.

Every second counts when you’re dealing with severe blood loss and a tourniquet is the fastest way to stop blood loss from an arm or a leg.

Where can you carry a tourniquet?

Most tourniquets are a little difficult to just stick in a pocket since a lot of them have a windlass of some kind to help you tighten them and the strap itself is usually a couple of inches wide. This makes a package that’s tough to carry around in some cases.

You can get around this in a couple ways. You can either buy a holder that allows you to carry the tourniquet in an easier way, or you can get a tourniquet that that doesn’t use a windlass.

The best way I’ve found to carry a traditional tourniquet with a windlass is the Phlster Flatpack Tourniquet Carrier. It’s made by a company in Philadelphia that does a lot of Kydex work. They’ve made a carrier that’s as flat as I’ve seen anywhere and rides on the belt really well.

There are other options out there, but for EDC the PHLster Flatpack is the best I’ve found.

If you want to go with non-traditional tourniquets then you should go with the SWAT-T Tourniquet. It’s less expensive than a lot of other tourniquets out there and it can be used in a couple of other ways as well.

Can you use a belt as a tourniquet?

Belts can be used as an improvised tourniquet, but they have a few things working against them.

Normally, a traditional belt has holes every half inch or inch and the holes stop out at the end of the belt. This stops you from being able to tighten the belt as much as you would need to use it as a tourniquet. You can get around this by adding holes all the way down the length of your belt, but it doesn’t guarantee that you’ll be able to get just the right fit when you try to use it as a tourniquet.

There are also some belts that are designed to be used as tourniquets. These have innovative ways to allow you to tighten the belt all the way to the end.

You can read more about the myths surrounding tourniquets in my article How to Stop Bleeding or in this article at verywellhealth.com.

What to consider when you’re choosing an EDC tourniquet: 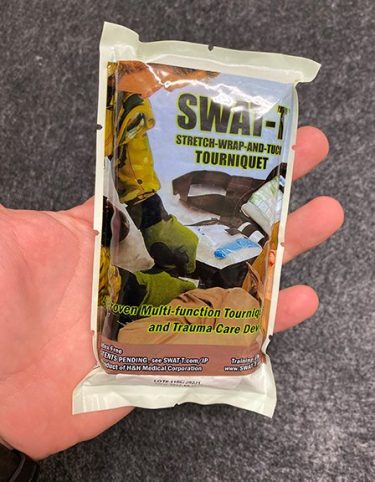 The best EDC tourniquet is the SWAT-T Tourniquet. It’s small enough to stick in a pocket at 4″ x 2.5″ x .5″ and only 4 oz. It also flexes so it doesn’t poke you in the leg like some other tourniquets do when you sit down.

It also has other things going for it. The instructions are written right on the tourniquet itself so in case you forget how to use it under stress, you can just read it. There are also markings on it to let you know exactly how tight it needs to be without being too tight.

You can also use it to hold splinting materials and cold packs in place. It’s even long enough to use as a sling for an arm if you need to. It also works great for pets and children.

The only real downside with it is that it’s difficult to apply to your own arm. You can do it, but it’s hard the first few times and it would be even worse if you had to do it for real. Applying it to one of your own legs is easy, it’s just the arms that can be tough. Traditional Tourniquet in a PHLster Flatpack

The other option I like is a SOF-T Tourniquet or a CAT Combat Application Tourniquet in a Phlster Flatpack Tourniquet Carrier. This option puts your tourniquet on your belt in a 5″ x 2.5″ verticle package. This ends up being a lot more expensive than the SWAT-T option but it gives you a lot of options for attaching tourniquets (or really anything) to MOLLE panels and tactical gear as well.

The big advantages that I see with this set-up are that it uses tourniquets that many people are already familiar with and can be easily applied to your own upper extremities.

Tourniquets have been used extensively in both Iraq and Afghanistan giving us a much better idea about their safety and effectiveness.

One of the main things that people tend to say when they hear the word tourniquet it that they’re not safe, and it’s simply not the truth. Tourniquets are designed to stop the blood flow to an extremity which isn’t ideal, but it’s a lot better than just letting that blood pour out onto the ground!

Why is a tourniquet considered a last resort?

In the past, tourniquets were considered a last resort. In today’s world where everyone has a cell phone and an ambulance can get to most people pretty quickly, it makes sense to use them whenever there is serious bleeding from an arm or a leg.

What is the maximum tourniquet time?

According to the Emergency Medical Journal, the maximum time that a tourniquet should be left on is around 2 hours. After 2 hours, you start to run the risk of permanent nerve and tissue damage.

Keep in mind, only trained medical personnel should ever loosen or remove a tourniquet once it’s been put in place.

Can a tourniquet cause amputation?

The big fear in civilian circles is that putting a tourniquet on someone will result in that limb needed to be amputated, but that isn’t the case unless it takes a very long time to reach medical facilities.

It is true that extended use of a tourniquet will cause muscle and nerve damage. Studies have shown that by 6 hours the damage to muscles is nearly complete and will likely require amputation.

Don’t let that stop you from using a tourniquet. Just get the victim to a hospital as soon as possible and you’ll be fine!

Why do you write the time on a tourniquet?

If you put a tourniquet on someone and then bring them to the hospital or they get picked up by an ambulance, there’s no way to tell when the tourniquet was first put on the victim.

Tourniquets are one of the most important medical items that you can carry with you. They’re not only safe, but they can make the difference between life and death in a bad accident. Make sure you have one on you at all times!